This is an extremely interesting corner of Poland, a bit lonely, until recently a bit forgotten and underestimated for many years. Currently, the Bieszczady Mountains are experiencing their renaissance, breaking new records for tourist visits.

Interesting facts about the Bieszczady Mountains

The oldest oil mine in the world

The world's first crude oil mines were established in the vicinity of the Bieszczady Mountains. It happened in the second half of the 1854th century. The oldest (the world's first) crude oil mine was established in the village of Bóbrka. It was built in XNUMX. The mine continues to operate today, and now houses the Museum of Oil and Gas Industry. Ignacy Łukasiewicz.
In the years 1854-1880 over 60 oil wells were dug manually in the vicinity of the Bieszczady Mountains.
The oldest mine in Bóbrka is best visited on the way to or from the Bieszczady Mountains, because it is located near Krosno. Detailed GPS coordinates of the mine are provided below.
Tickets to the museum can be buy online on the museum website.

The world's second herd of bison

The second largest bison population in the world lives in the Bieszczady Mountains. In 2020, 668 units were added. This is 117 (!!!) more than in the previous year. Interestingly, until 1963 there was no European bison in the Bieszczady Mountains and no hard evidence that they would ever live here. They were brought here in 1963 and more individuals were delivered in the following years. They came from breeding, because in the 54th century all free-living herds became extinct. Only XNUMX specimens remained, which became the only chance to save the species. The Bieszczady Mountains have been selected as one of several areas naturally conducive to plans to save the species.

The darkest place in Europe

The Bieszczady Mountains are one of the few areas in Europe with the lowest artificial light pollution. This makes it perfect for astronomical observations. It happened thanks to the initiative to create the Sky Star Park, a huge area in which unnecessary sources of artificial light have been consciously eliminated. Until a few years ago, there was no place in Europe that would meet the requirements of an area free from artificial light pollution. Currently, there are only a few of them, including one in Poland.
You can see more than 7000 stars here with the naked eye. For comparison, in a village with only a few lamps you will see roughly 2500 stars. In the city, you will only see a few hundred objects, and in large cities their number drops to 200.

A huge fragment of the World War I front ran through the Bieszczady Mountains. It was here that many battles took place between the army of the Austro-Hungarian Empire and the Russian army, the traces of which in the form of trenches and fortifications can be found until today, among others on the slopes of Tarnica or Halicz. The fate of the battles changed many times, so the front swept through the area several times: one way and the other. Soldiers died for a variety of reasons, not only from enemy damage. A frequent cause of death was hypothermia during severe winter frosts and illness. In turn, the local population suffered from hunger due to the fact that the armies fighting at the front deprived them of their supplies, or even leftovers of food. An often cited example illustrating the depth of poverty prevailing at that time is the destruction (tearing and cutting) by soldiers of thatch covering the roofs of houses for horse feed. Apparently, in the spring time, when the vegetation is not too lush in some areas, you can still find soldier's metal canteens, mountain crampons, shovel-shovels, fragments of missiles ...
It is estimated that 100 to 150 thousand people died in the Bieszczady Mountains during World War I. Their graves can be found near the forgotten cemeteries overgrown with forest, located near villages that had been displaced and destroyed in the XNUMXs. You will find one of such places on the trail to Halicz.

Breeding horses that run in the wild

Horses in the Bieszczady Mountains graze slowly. No barriers, no restrictions. At least this is how the horses that you can meet near Wołosaty, where the Bieszczady National Park runs the Conservative Kona Huculski Breeding Farm, have.
So don't be surprised when a freely running horse crosses your path. However, there is no need to worry! "Hucuły" are exceptionally gentle and friendly horses, eagerly used, for example, to transport children.

Beginning of borders and border number 1 bar for three countries

Krzemieniec (1221 m above sea level) is a peak in the Bieszczady Mountains, where the borders of three countries meet: Poland, Slovakia and Ukraine. The border post there has the number "1" and it is number one for each of the three countries! There is a granite obelisk with the emblems of three countries and the names of the summit in three languages. Ukraine has placed a "time capsule" in this place. At the Polish border post No. 2 there is the highest point of Kremenets, and the Slovak post No. 2 is also the easternmost point of Slovakia

The only area where the three largest predatory mammals occur

Bieszczady is the only area in Poland where the three largest European predatory mammals live: brown bear, wolf and lynx. You might think that the Bieszczady Mountains are a very predatory place, especially as you can come across road signs and warning signs here and there: ATTENTION! Bears or NOTE! Lynx! ... but most of the inhabitants who live and wander around the Bieszczady Mountains have never met any of them for several dozen years. Bears, lynxes and even wolves are not looking for opportunities to meet humans. They probably see and hear us more often (that's certain) than we hear them and usually then go their own way, in a completely different direction. Man is hardly the favorite of animals.

What do the Bieszczady Mountains have in common with the Baltic Sea and the Black Sea? In the Bieszczady Mountains there is the so-called the watershed of the seas. It is a characteristic dividing line along which runs the boundary of waters flowing into one two seas. Most of the waters originating in this part of the mountains flow into the Baltic Sea, but there are also some that end up in the Black Sea. Those are:
- Strwiąż, which starts in Ustrzyki Dolne
- Maszanka, which flows through Michniowiec.
So if you want to send a bottle letter to someone who lives by the Black Sea, you have to "send it" in these streams.

The farthest southern point of Poland

In the Bieszczady Mountains lies the southernmost tip of Poland, and at the same time the peak: Opołonek (1028 m above sea level). Unfortunately, there is no regular trail leading to it and it is inaccessible to tourists.

The largest snake in Europe

Aesculapian snake is the largest snake in Central Europe and of course in Poland. Its length may exceed 2 m. The longest known specimen was 2,25 m long, and the longest caught in Poland (in the Bieszczady Mountains) was 1,61 m. The Aesculapian dragonfly is an oviparous snake, and the female lays 5 to 12 eggs on average. She chooses very warm and humid places to lay her eggs: rotten trees, piles of sawdust, rotting leaves. Aesculapian snake is not poisonous. The prey (mice, chicks, small birds, lizards) is caught with its mouth, then wrapped with its own body, choked and swallowed whole.

Caves in the Bieszczady Mountains

There are 15 caves in the Bieszczady Mountains, but most of them are rather not impressive in size. Most of those that can be found in the official list do not exceed a few meters, and there are also those that are ... only 2m !!! It's just a hole in the ground, the size of a not-too-large composter 🙂 Although so small, the cave even has a name: the Shelter of the Vagabonds ... and who knows? There must be something there!
Lest it be that I depreciate the Bieszczady caves, there is also one that is 60m long: the Dolna Cave in Nasiczne.

An interesting thing happened in March 2003. A dozen or so meters from the top of Tarnica, right next to the yellow trail leading to the top, a hole 2,5 meters deep has spontaneously revealed itself. It turned out to be the entrance to a 16-meter cave, the existence of which no one knew before. The cave was examined and described by speleologists, and then, due to the danger it could pose for curious tourists, in 2008 the entrance to it was filled up.

Dogs are not allowed to enter the Bieszczady National Park

Can you go with your dog on the trail in the Bieszczady Mountains? No you cant!
The official reason for this is that dog droppings can spread serious diseases.
However, I can imagine an embarrassing situation when, on a steep Bieszczady trail, a dog scares someone or inadvertently runs under someone's feet. Or even while on a leash, he suddenly decides to greet another dog that is separating himself along the trail, and the man gets tangled in the leash ... and a serious accident is ready.
In short: the Bieszczady National Park forbids bringing dogs.

Record attendance in the Bieszczady Mountains and 140 km of trails

There are a total of 140 km of marked hiking trails in the Bieszczady Mountains. A record attendance was broken in July 2020. Bieszczady were visited by nearly 168 thousand. people. This is 45% more than the year before.

Tarnica - the most popular destination in the Bieszczady Mountains

Tarnica is the most popular destination for expeditions in the Bieszczady Mountains. According to the data from the record-breaking number of tourists in July 2020, 46 entered Tarnica. tourists. This means that every day almost 30% of all tourists walking around the Bieszczady National Park enter Tarnica! 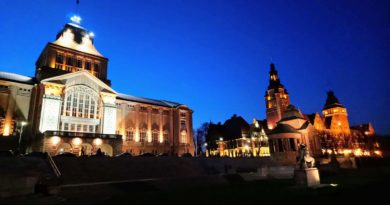 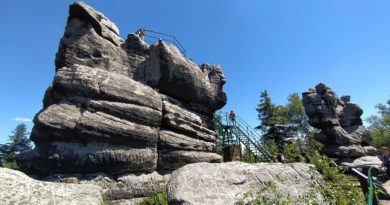 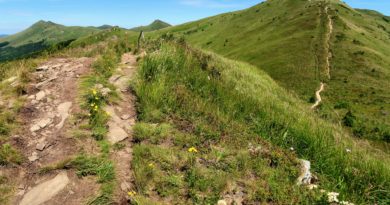 2 comments for "Bieszczady - curiosities that you (probably) do not know"