Colloquially they are called "plague stones" or "plague". Most of the walkers pass by indifferently, but only for a while.
It is enough for someone to notice:
"Look! Something is written on this stone ... about!!! And there is some strange cross! " … And here comes my favorite state. The state of asking yourself questions. What is it? For what? Why ...

The first inscription on the stone is easy to decode, because it is the number 1773. Isn't that obvious? I have not met anyone yet who would say that it is, for example, the mass of a stone in kilograms, or the circumference at its widest point. It is known to be a date. So it is enough to search the Internet for a moment and see what happened in 1773 in this area.
The date seems to be familiar and close to the date of the first partition of Poland (1772), known to all. There is no coincidence here. The authorities of Prussia decided to act quickly and already a year after the first partition they decided to carry out an administrative reform in order to better assimilate new territories. Of course, Szczecin was not part of the partitioned areas at that time, but as part of the reform, new borders were marked out in many areas (even those not from the partition) and new provinces were given new names. The location of the plague stones corresponds well with the border between the Gryfino and Szczecin lands at that time. It can therefore be assumed with high probability that the stones in the Beech Forest are border stones between these areas. At the same time, it is the first of the two most probable theories explaining the presence of stones.
What about the cross on the stones?

The cross on the stones is the source of the second theory that they were plague stones. Mighty? What does that mean?
Here you can fall into a linguistic trap, because the word "plague" has two opposite meanings. It stands for "nasty, contagious, disease, contagious" and "cool, good, decent, wonderful." In this case, of course, it is about the primary, definitely negative color that comes from the word "mór", that is, plague.
But let's go back to the cross, because it is he who connects the stones with the plague. The cross that has been carved on each of the stones has characteristic, two transverse arms. Is called "caravaka", And was colloquially called" the choleric cross "or" the plague cross ". The name of the cross comes from a Spanish city Caravaca. In this city there is a reliquary in this shape (a cross with two cross arms), in which the relics in the form of splinters from the holy cross - the one on which Christ was crucified - are kept. There is a legend connected with the reliquary, according to which it has a miraculous origin (it was brought by angels). It quickly became an amulet popular all over Spain. It protected from many accidents, diseases, sudden deaths, curses, thefts, storms and lightning, and treated insomnia. As you can see, the use of the caravak was quite wide.
In Poland, the caravak cross was extremely popular in the eighteenth, nineteenth and early twentieth centuries as a cross to protect against plague. But was it really? Of course he was… and still is! Online stores are currently selling a COVID-19 caravak for the "difficult time of the epidemic" (the wooden cross can be purchased at a 15% discount at the price of PLN 19,47).
The second theory about the plague stones is that the placement of the stones is related to the plague, specifically the plague. However, opponents of this theory point out that at that time there was no plague in this area. True, it wasn't. So how is it with these plague stones?

Is the truth in the middle?

Personally, I am convinced that both theories are true. One does not exclude the other. The plague stones that we can see today in the Beech Forest are border stones related to the administrative reform of Prussia of 1773. However, digging deeper into the context of those times, it is worth remembering that the plague terrified and decimated people for hundreds of years. Plague outbreaks appeared from time to time in different places, several times the size of a pandemic, killing millions of people. Around 1773 there was no plague in Prussia, but it spread strongly in Eastern Europe and Russia (in 1771 in Moscow it killed 1/3 of the population).
Placing the caravak on the border stones that were being placed was probably preventive. It was a protection against the infiltration of the plague from infected areas of Eastern Europe and from various other parts in the future. The Black Death had been returning incessantly for nearly a thousand years, so any way to stop it in the future was worth pursuing. After all, it was known that he would come back again someday. Back then, no one thought that the cholera epidemic would become the real nightmare of the XNUMXth century ... but that is a topic for another story.

Curiosity
A granite post is dug in next to each plague. The post shows signs carved on the plague stone (i.e. 1773 and the carawaka), but there are other symbols below. These symbols are also found somewhere in the mole. They are very poorly visible, and on some muggers even illegible and very difficult to find. There was a different mark on each mole. In order to prevent their total loss, it was decided to copy them and immortalize them on the granite posts buried next to them. Unfortunately, they are also poorly visible on them and to see them you have to look at the right angle (lying on the ground is guaranteed). On the other hand, the shape is perfectly felt under the finger. The meaning of these symbols has not yet been clarified.

How to find plague stones in the Beech Forest

In fact, everywhere you can find information that "they are located along the red trail and are arranged at equal intervals on the road between the Three Brothers Pass and Podjuchy". Well no! The plague stones are easiest to find, not along the red trail and not along the road listed above. They are also not evenly spaced.
The location of the plague stones (I marked 6) can be found on the map below.
The approach path on the map is marked with red dots, but there is actually no red trail here. There are other dishes, but none leads to plague.
The path I propose is about 2 km long one way (about 30 minutes at a walking pace).

The easiest way to reach the plague is by parking your car in the parking lot at Emerald Lake.

Then go up the road next door The Emerald Inn, through the wooden "gate to the forest" and then on the road uphill. At the top of the hill, there will be a key moment, because several roads intersect here and it is difficult to explain which one you should go on. However, photos and phone navigation will help us.
In the pictures below, I have shown the right way. You have to go to the left of the rest shelter (marked on the map), and then along the path next to the post with the number "11" and the bench to rest (I also marked this point on the map).

Then follow the map below. You need to be especially careful about the bifurcation shown in the photo below. Here you have to turn left, as shown by the sign "Viewing Route".

Of course, it's always a good idea to have navigation on to know if you are approaching your destination.
Once you've found your first stone, it should be easier to find the next ones.
The trip to the plague can be extended by going further to places of pagan cult of the Slavs - [click].

Mała Rawka and Wielka Rawka: the trail from the Wyżniańska Pass 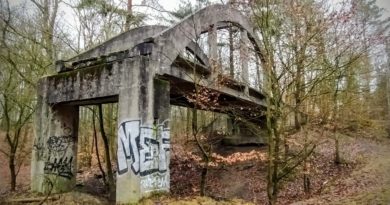 4 comments for "Plague stones in the Beech Forest - how to find plague? Map, interesting facts."