A white river, a golden waterfall

It all starts with a glacier Langjokull (lang = long; jökull = glacier), in the mountainous and inaccessible interior of the island. The second largest glacier in Iceland, while melting, produces huge amounts of water. The water flows down and collects at its feet in the form of a glacial lake called Hvítárvatn (hvítár = white; vatn = water).
However, the capacity of the lake is limited, so excess water flows out of it, thus giving rise to the course of the river Hvita (hvítá = white).
The water in the river flows happily for about forty kilometers, until finally comes the moment when he has to make a breakneck leap into the abyss: the waterfall Gullfoss. Here the white waters of the river turn to gold. Gullfoss it means Golden Waterfall (gull = golden; waterfall = foss).

It is easy to guess that the most water flows through the waterfall in summer, when the glacier melts faster. In winter, there is less water, so the waterfall feels a little calmer, which doesn't mean it is ever calm. One hundred cubic meters of water per second, falling from several dozen meters down into a deep ravine, never looks calm!

There are several stories about the origins of the waterfall's name, but it is not certain which one is closest to the truth.
Some prefer the legend of a greedy farmer named Gygur, written in the early XNUMXth century by the physicist and nature observer Sveinn Pálsson, in his journals.
Greedy Gygur dealt mainly with warming throughout his life, accumulating considerable wealth (he preferred gold). At the end of his life, however, he realized that after his death, all the wealth he had accumulated would be in the hands of someone else. O horror! Gygur couldn't let that happen! So he decided that it would be better to drown the gold in a waterfall than to let someone else enjoy its wealth. As he invented, he did so, and gold is still there today.
When you see the waterfall live, you will understand why it is impossible to check if the legend is true. The awe-inspiring and at the same time captivatingly beautiful water surf defends this mystery with irreconcilable ferocity.

Another story tells that during dusk the waters of the flowing river and the waterfall take on a golden hue, assuming the color of the rays of the setting sun.

The third story is my favorite. According to her, the water of the waterfall, sprayed with a powerful force, sparkles in the sun's rays, creating a golden rainbow. However, to see it, you need a sunny day, and we were not given it. As to anger, clouds came and I could not verify this version myself. Fortunately, there is the Internet and reliable travelers in it.
Here is a photo that illustrates the phenomenon described above.

The waterfall we see today was close to non-existent. If the plan of a British businessman came true, instead of a waterfall, we would admire a hydroelectric power plant. In 1907, the then owner of the Tómas Tómasson waterfall, received an offer to buy it back by the aforementioned British businessman. He rejected her. Some time later, however, he agreed to the lease of the land. There was a legal loophole in the lease agreement which allowed for the construction of the power plant.
For obvious reasons, the idea of ​​building a power plant on the waterfall had many opponents. Tómasson's daughter, Sigríður Tómasdóttir, led a sort of "resistance" to the construction of the power plant. A loud, very long and observed all over Iceland court battle in the style of: the average citizen against big business and money began.
Ultimately, the trial was inconclusive, but plans to build a power plant were abandoned. The reason was the financial difficulties of the entrepreneur planning to build a power plant. He did not pay the next lease installment and lost the right to use the land.
Over time, the waterfall and the area around it were bought by the Icelandic government, and in 1979 a nature reserve was established here.
In honor of Sigríður Tómasdóttir, a commemorative plaque was erected at the waterfall, and the lawyer, Sveinn Björnsson, who supported it during the trial, became the first president of the independent Republic of Iceland in 1944.

A comfortable asphalt road No. 35 leads to the waterfall. The distance from Reykjavik is 116 km, and the travel time is about 1 h 40 min. You can choose from two car parks: lower (smaller) and upper (larger).
There is a paid toilet in the upper parking lot, a food court (soups, sandwiches, salads, cakes) and a souvenir shop.
It doesn't matter which parking lot you stop at. Everything is very close together.
Parking lots are free.

WARNING!
Not far from Gullfoss there is a geothermal area with geysers: Geysir and Strokkur.
Gullfoss is one of the attractions of the so-called The Golden Circle, a group of attractions near Reykjavik that can be visited during a day trip by car or with a travel agency. So you don't even need to rent a car to see the Golden Circle. Golden Circle tours are one of Iceland's most popular attractions.
You can view the tour offers and buy them online, via comparison of offers - [click].

There are two short walking routes near the waterfall: lower and upper.
Admission to the paths is Free.

Lower route the walking path leads from the natural rock observation deck situated between the upper and lower cascades of the waterfall. The route runs close to the water, along the bottom of the gorge with the waterfall. You go so close that the water sprayed by the waterfall often falls like rain on people passing by. solid waterproof clothing or a plastic cape is necessary. The route ends on a rocky terrace surrounded by water flowing between the lower and upper cascades of the waterfall. You are so close to the element that you can't get any closer. I recommend! It's worth getting wet!
When walking, you should put your feet carefully because the path is wet, often muddy, and the rocks are slippery.

Top track it runs along the edge of the gorge's crest and allows you to see Gullfoss from a different perspective. There are viewpoints at the edge of the rocky cliff and the views are spectacular.

The tour will take you approximately 30 minutes to complete the tour.

Hotels and accommodation nearby Gullfoss

Below I present accommodation suggestions and a link to accommodation bases near Gullfos - [click].
The link is prepared so that the hotels closest to the waterfall are displayed at the top of the results.

The entry you are reading is an element prepared by me Iceland sightseeing plan. Most likely, everything you need to prepare for your trip to Iceland can be found in this entry. Weather, accommodation, car rentals, tourist attractions and a map of a trip around Iceland ... all in one place: Iceland - map and sightseeing plan, tourist attractions, excursions, the most beautiful places - [click]. Be sure to read!
5/5 - (50 votes) 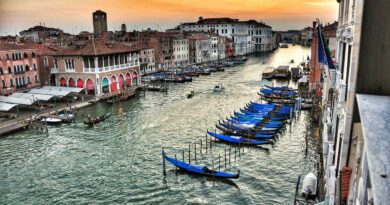 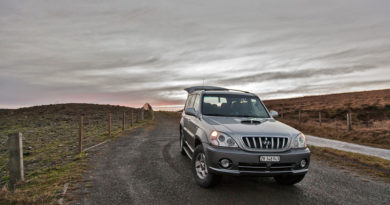 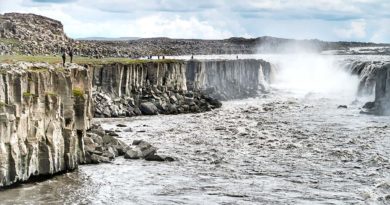